Most equestrians are familiar with worms – a term which describes a wide variety of parasites, all of which reproduce inside a horse’s gut, but understanding and managing worming for your horse is a big subject. In sufficiently large numbers, they can pose a severe risk to their host; an infested horse will likely suffer from a variety of digestive problems – which unfortunately in some cases, can even prove fatal.

Guarding against worms however, is a tricky business – while treatments are available, they should be used only sparingly for reasons which will become clear. 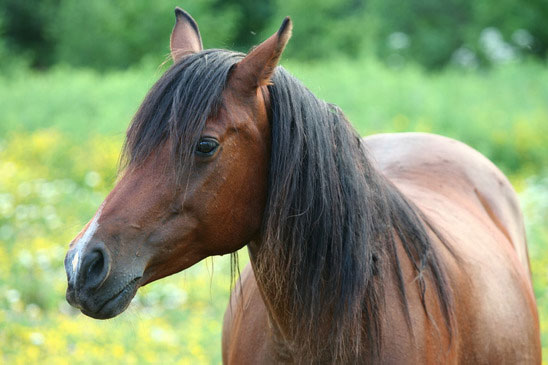 What do worms do?

Simply put, worms interfere with your horse’s ability to properly digest food. They do this in a variety of ways. Small redworm larvae, for example, will bury themselves in the lining of the horse’s gut and from there develop into adults; this can cause the walls of the surrounding blood vessels to swell and thereby inhibit the flow of blood to the horse’s digestive system.

In small numbers, this represents a minor nuisance. However, when worms are present in sufficient quantity, this minor nuisance can become a severe problem for the horse. The resulting symptoms can be diarrhoea, rapid weight loss, colic and even sudden death. It is therefore imperative that worms are identified and treated as soon as they are identified.

How does a horse contract worms?

Horse faeces invariably contain some quantity of worm eggs and larvae. The parasites are able to migrate from droppings to the surrounding grass and from there they can be ingested again. This effect is particularly severe in wet weather, as the moisture provides the parasite with a medium through which it can more easily travel. In the case of bots, things are slightly different. A botfly will lay eggs on the body of the horse itself and these eggs are subsequently ingested when the horse grooms itself.

The problem of resistance

Worms can be eradicated using specialist worming medication – which come in many varieties in order to treat the different types of parasites. Apply this medication too often however can lead to it becoming ineffective and thereby useless.

When a horse is wormed, the worms which are most sensitive to the treatment are destroyed and those which are most resistant are not. Over time that resistance will spread throughout the population and lead, over time, to the medication becoming ineffective. Since the parasites in question reproduce rapidly, these changes can occur in a very short space of time. Manufacturers of wormers are therefore engaged in a protracted arms race with the parasites they seek to eliminate.

The worms untouched by the treatment are called the ‘refugia’ and maintaining their numbers is crucial in ensuring that resistant strains do not come to dominate the worm population. If worming is performed too frequently, then there will be no refugia left and the remaining worms will be entirely resistant to the wormer.

Widely-touted estimates hold that four-fifths of the equine worm population is being carried by only one-fifth of horses. Worming, therefore, should only be performed when required – and worming too often can be just as bad as not worming enough. This dilemma poses the significant question: how can one tell if a worming is required?

How can worms be checked for?

The best way to check for the presence of worms is through a Faecal Worm Egg Count (FWEC). This involves collecting a sample of the horse’s droppings and sending them off for study, either by your local vet or by a specialist laboratory. The results of the test will give an indication of whether worms are present in the animal.

The reliability of the test will vary considerably between different organisations, so it’s worth performing a little research before making a decision. A specialist may be able to offer superior facilities; your local vet on the other hand, may have a better understanding of your circumstances (and those of your horse).

The situation is further complicated by the fact that there are some types of worm which cannot be tested for using this method. Tapeworm, for example, must be detected using a blood or saliva test, while certain smaller forms of redworm cannot be tested for at all and must be eliminated as part of seasonal worming sessions.

Should I Isolate a horse after it’s been wormed?

It has long been thought that a horse should be kept in isolation after a worming. This conventional wisdom came into being because worm eggs could still survive outdoors and so could be ingested again. However the wormers of today do not simply purge the animal’s gut of parasites – their effects are more exhaustive. As a consequence, this particular piece of advice is no longer applicable – and keeping a horse confined to a stable can have adverse effects of its own.

That said, if a horse has only recently been introduced, they should be kept quarantined from their peers until their health can be assured.

Should I worm my new horse?

Those who have recently purchased a new horse are often unsure whether worming is necessary, and whether the horse can be safely introduced to other horses. In such instances, it is almost always better to be safe than sorry. If you are in any doubt about a new horse’s worming history, you should consider them a potential source of worms; perform a FWEC as a matter of urgency and then follow up with a second two weeks later if the results of the first were concerning.

How often should a horse be wormed?

Despite the dangers of resistant worms, research recently carried out by the University of Edinburgh indicates that British horses are still being wormed far too often – and thusly the problem of resistant worms is being exacerbated. A horse should ideally be wormed only twice a year. This is typically done in March and November – when redworm is at its most virulent. Between these wormings, periodic FWECs should be carried out in order to check whether worms are present and worming performed where necessary.

A worm count is typically described in terms of the number of eggs per gramme of faeces, or epg. Generally speaking, an egg count of higher than 500epg is cause for concern in a fully grown horse (though this number may be lower in foals.) Your vet will be able to advise you on whether worming is necessary.

Different varieties of worms are active at different points throughout the year. As we have seen, tapeworms are most active during spring and autumn, when horses are heavily grazing. In autumn the danger is compounded by small redworms, whose eggs do not show up in a horse’s faeces, while in December horses are most at risk from bots.

Can a horse overdose on worming drugs?

Leaving to one side the dangers of allowing parasites to become resistant, some varieties of worming drugs can be toxic in high levels. It is best to get an accurate measure of your horse’s weight, using a weighbridge if possible and then dose accordingly.

How do I administer the wormer?

The traditional method of administering a wormer is the most direct: injecting it into the horse’s mouth. This can be a problem for some horses though, who be reluctant to have a syringe anywhere near them. In such instances, you might consider wormers which can be mixed with a horse’s food. If the required variety of wormer is not available in such a form, however, then can administer the required dose into the horse’s feed; just be sure that the animal eats the entire lot thereby getting the full dose of wormer.

How do I prevent my horse from contracting worms?

As with most conditions of this nature, it is far easier (and cheaper) to prevent worms from establishing a foothold than it is to eliminate them after the fact. Horse owners will therefore be looking for ways to minimise the risk posed to their horses. Fortunately, there are a few simple ways in which this can be done.

Beyond worming, there are a few simple measures which will limit the threat posed by worms. Ensuring that your horse grazes in the cleanest possible environment is by far the most important step you can take. Periodically move horses from one field to another and remove the faeces from the vacant lot and let it sit for a week or so – but do not do this immediately after a worming, as the sensitive worms will have been utterly eradicated, leaving the resistant ones free to take control of your horse’s gut causing an extremely stubborn long-term problem.

You might also consider grazing other animals alongside your horses. The prevalence – and resistance – of worms has been shown to be reduced when horses share the same gazing area as other animals, such as sheep and cows.

A worm’s life cycle relies on its larvae being ingested by a horse. When another species ingests a worm larvae, then the life-cycle of the worm in question will be interrupted. This thereby reduces the prevalence of both resistant and susceptible strains alike.

Fields should be frequently ‘poo-picked’, in order to prevent harmful larvae present in faeces from migrating to the grass. If your horses are free to graze in a clean environment, seasonally wormed and periodically checked for worms, then they will be well shielded from the harm these troublesome parasites might cause them.