The Appaloosa is among the most visually distinctive of all horses. They’re known for having moulting skin around the eyes and muscle, and for having white sclera – unlike other horses, whose entire visible eyeball is coloured. It’s this visual distinctiveness for which they’re so highly-prized; they’re a recurring feature in silver-screen westerns, being descended from Native American animals.

Let’s examine this fascinating breed more closely, and see what they’re like to own.

The Appaloosa has a rich history, having been refined and developed over many years 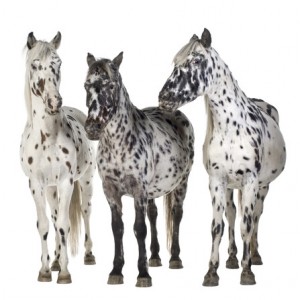 by tribes of Native Americans – to whom the animal owes its unique, coloured fur. The breed as we know it today likely originated in the aftermath of the Nez Perce War, waged by the United States government against the Nez Perce tribe of Native Americans in order to forcibly remove them from their ancestral homeland. After their victory, the aggressors forced the Nez Perce to relinquish more than a thousand of their horses – many of which had been bred to display the distinctive spotted pattern found on the modern Appaloosa. These initial thousand were then sold in the state and in those surrounding it, and subsequently crossbred with other breeds – mostly Arabians and thoroughbreds.

The Appaloosa is not the first breed to have been spotted, however. There are depictions of spotted horses found in ancient Greek and Persian artworks – and even cave paintings dating back thousands of years beforehand in each of these regions. It’s likely that the pattern is therefore found on a form of wild horse, which was then domesticated. This breed might then have been introduced to the Americas by Spanish conquistadors.

The Spanish encounters with the natives would not have been entirely destructive – they allowed some of them to live as servants. These Native Americans would be tasked with looking after and rearing Spanish horses. It’s through this work that the skills necessary to breed horses were passed from one culture to another. These skills then spread northward in just a few generations, and it wasn’t long before tribes like the Nez Perce were breeding horses according to their own purposes and cultural mores. It just so happened that Native Americans favoured this visually striking breed.

The Appaloosa is famed for the sheer variety of its colours. Horses are available in grey, black, dun, brown, grullo, roan, buckskin, to name but a few. Moreover, Appaloosas are patterned in many different ways – you’ll find their hair covered in spots and marbling, making this one of the most visually striking and distinctive breeds of all.

The breed is taller than most horses at around sixteen hands high, and slightly heavier at around 1,100 pounds. The average appaloosa will live for between twenty-five and thirty years, which is on a rough par with horses in general.

The Appaloosa is regarded as a warm-blooded horse. What this means is that the breed is somewhere between a hot-blooded horse and a cold-blooded one; the former category are generally the nimbler breeds, whose lither metabolism can be quickly overwhelmed by a rush of blood. The latter are larger and less prone to panicking; they have a gentle disposition which makes them well-suited to working with novices and children.

The appaloosa is regarded as a warm-blooded horse, meaning that it neatly straddles the middle ground between these two extremes. It is quick and agile, as a hot-blooded horse might be, while still having a mild temperament, making it easy to handle. As such, the horse is popular in a range of disciplines – and can be found competing at Olympic level in sports like dressage.

In the main, the Appaloosa is a healthy breed. That said, they are prone to a couple of genetic eye conditions which owners will need to be wary of. The first is congenital stationary night-blindness (CSNB), and the second is Equine Recurrent Uveitis (ERU). Let’s take a brief look at each of these in turn.

CSNB is a condition affecting Appaloosas which renders them unable to properly see in the dark. It’s a condition which will progress over the horse’s lifetime, and there’s no cure. However, there are steps one can take to make life easier for an effected horse.

It’s not known for sure what causes the disease, though it seems highly likely that it’s related to selecting for white sclera when breeding. One probable cause is a defect in signalling in the retina. There are two sorts of photoreceptor in a healthy eye – cones, which work best in the daytime, and are sensitive to colour, and rods, which work best at night-time. A malfunction of the latter could lead to a lack of vision in darkness.

The condition can be diagnosed using a device called an electroretinogram, which measures the response of the animal’s retina to a flash of light. Horses which suffer from CSNB are also prone to another disease, known as Strabismus, which prevents the horse’s eyes from properly positioning. This may cause on or both of the eyes to become slightly rotated.

Uveitis is a condition which causes the muscles controlling the eye to spasm and cramp, pulling the horse’s pupil into a narrow slit. This condition is not only extremely painful, but it results in a loss of vision, too. It was once thought that the disease was related to changes in the lunar cycle, and for this reason it was called moon-blindness.

We now know that it’s instead a result of a malfunction in the animal’s autoimmune system, brought on by a myriad of factors, ranging from bacterial or viral infection to trauma to the horse’s genome.

When this inflammation occurs over and over again, as it does in the recurrent form experienced by the Appaloosa, it can cause cataract formation and glaucoma. Fortunately, there are ways of combatting this inflammation through a special implant which slowly releases a special drug into the retina over a period of several years.