Thanks to its long-standing association with the auto-mobile industry, the word ‘Mustang’ has long been synonymous with raw power. One might therefore suspect that an actual Mustang must be as wild and impractical as is namesake – and reserved only for thrill seekers with the equestrian nous to handle it. Is this breed anywhere near as rambunctious as its legacy in pistons and cylinders might suggest? Let’s find out.

Mustangs are popularly described as wild horses. But this is a slight misnomer; though Mustangs roam the American west, and in most cases live their entire 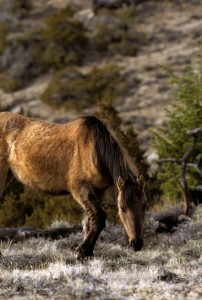 lives without direct human interference, they are actually descended from domestic horses brought over by early Spanish settlers in Mexico. These early breeds were likely to have in turn been descended from breeds imported from Arabia.

It’s therefore more accurate to describe Mustangs as ‘feral’ horses. That minor quibble aside, the Mustang’s relative wildness plays a key role in the way that it handles and behaves. It’s true that the most important distinction between the Mustang and other breeds is the fact that it’s feral. This doesn’t, however, necessarily mean that it’s impossible to control; mustangs, when caught early in life, can be just as amenable as other breeds.

As these domestic horses gradually moved their way northward from Mexico to Canada, they were introduced to the Native American population – who at first took them as useful only for meat. But, as the Spanish enslaved many Native Americans, and tasked them with looking after their horses, the skills necessary to use them were spread throughout the tribes, who quickly began using them for commerce, transport and warfare.

The eventual result of all this was an explosion in horse numbers – many of whom spread rapidly across the Americas, as their natural predators were scarce (it was only wolves that were really capable of posing a threat to the horse, and a single horse could feed an entire pack for a week).

Now, it would be untrue to say that mankind hasn’t had an influence over the evolution of this animal even after it became feral. In some US states, like Nevada, Mustangs are notably larger than in others. The likely explanation for this is that larger horses were introduced into the mustang breeding stock.

Up until the 19th century, many farmers in America relied heavily upon large, powerful draft horses to pull their ploughs and perform other tasks requiring great strength. Similarly, these horses were employed heavily by the transport industries, and for ferrying aristocrats around city centres.

But, when mechanisation changed the face of both transport and agriculture, these horses became obsolete in just a short space of time. Since feeding these enormous horses constituted a considerable expense, many farmers elected to release them into the wild. These draft horses were then free to mingle with the wild horse populations, and, thanks to their considerable size and strength, quickly assumed a commanding position in the herd’s pecking order. The gene pool was thereby hugely influenced in favour of the larger breeds.

So, we might say that the motoring industry has not only been influenced by this animal – it had a profound influence in the other direction long before then!

All the Mustang’s relative wildness really means, in practice, is that it possess genetic qualities which make it able to survive in the wild, and pass its genes on to the next generation. In a herd of wild horses, who must co-operate to secure food and mates and safeguard themselves from predators, being an unreasonable maniac would be far from advantageous, would be an enormous hindrance. Similarly, being dim-witted or lazy would be disastrous – and so these qualities are largely absent from the Mustang.

Wild horses have a number of advantages over domestic breeds. Foremost among these is good health (at least, until the horse is old enough to have given rise to the next generation). While a farmer might preserve a favourite horse in spite of debilitating sickness, Mother Nature is not so sentimental. If you’re a member of a herd of wild horses, and you become lame as a result of your genetic legacy, then you’ll likely get left behind and die before you have a chance to pass that legacy on. This means that, for the most part, Mustangs are far less prone to such conditions. Moreover, their hooves and legs – upon which they heavily rely on in the wild – are in excellent condition. Natural selection, then, is far more ruthlessly effective in rooting out genetic weakness than artificial selection.

Leaving aside their physical robustness, Mustangs are also mentally sharp. They are alert where other horses might be docile – go for a walk around one and it’ll certainly be aware of your presence. This alertness is a crucial feature in the wild; it allows them to be aware of predators, and thereby avoid becoming lunch.

Since mustangs have not been specially bred for any particular purpose, they’re great all-rounders, an able to perform a variety of tasks well. For this reason, you’ll find them put to use in pursuits as varying as endurance riding, hunting and even heavy farm work.

Mustangs are what’s known as warm-blooded horses. They represent the middle ground between hot-blooded horses, who are quick, alert and more difficult to control, and cold-blooded ones, who are larger and more docile. This makes them ideal for general riding, and for instruction of intermediate-level riders. They’re a pleasure to ride, being powerful enough to provide something of a thrill and yet intelligent and obedient enough that they’re not likely to panic. Naturally, they’re not able to compete with more specialised breeds in extreme events like racing – but they’re far less prone to a broken bone or a bleeding lung while making the attempt.

Mustang life expectancy is slightly shorter than average, with the average Mustang living for just two decades to the three enjoyed by the majority of breeds. It’s also a few hundred pounds lighter than other breeds, and a hand or so taller, at 750 pounds and sixteen hands. That said, as we’ve seen, these features can vary significantly depending on where the horse was captured.