Throughout spring and summer we frequently take phone calls from owners who find that their mare’s behaviour has changed. The mare may suddenly become difficult to handle. Ridden work, especially at competitions. may be impossible! These behavioural changes may be associated with the mare’s oestrus cycle, or ‘seasons’. This article describes how we diagnose these problems and outlines the latest treatments available. 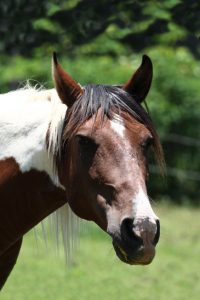 Tart with a Heart or Troublesome Trollop?

The challenge for the owner and the vet in these cases is to determine whether the unwanted behaviour is truly related to the mare being in season or whether there is an underlying, undiagnosed illness causing a behavioural problem.

The signs may be quite vague and non­specific and Include:

A full and thorough veterinary examination is necessary to determine whether the behaviour is related to the reproductive tract.

Conditions to Rule Out.. ….

There are several clinical conditions unrelated lo the mare’s seasons that can cause behavioural changes These should be considered and if appropriate. investigated to rule out a more serious illness. Examples of such conditions include:

The vet’s approach to assessing the moody mare is therefore likely to indude a general clinical exam, an evaluation of lilml’ness and b.,ck pain and an oral examination with a gag. Gastroscopy may be performed if there is a suspicion of gastric ulcers. An ultrasound scan of the reproductive tract may also be undertaken.

There are several conditions specific to the reproductive tract that may result in undesirable behaviour. These may be ‘pathological’ (abnormal) or ‘physiological’ (normal). Following accurate diagnosis both groups may require treatment if meaningful ridden work is to be possible. This month we will focus on behavioural problems related to a normal oestrus cycle. Next month we will discuss some of the pathological conditions that can cause undesirable behaviour.

During the natural breeding season, mares are typically in season (‘heat’ of oestrus) for 5-7 days. Ovulation occurs at the end of oestrus and the mare enters ‘dioestrus’. During dioestrus the mare is under the influence of the hormone progesterone and is not receptive to the stallion. Dioestrus lasts approximately 15 days and ends with the mare coming back into season. The oestrus cycle therefore lasts about 21 days.

Some mares show behavioural changes during their oestrus period. During oestrus the otherwise well-behaved animal may become angry and difficult to handle or lethargic and lazy. The behaviour is cyclic; problems for one week and normal for the other two weeks. It can be very useful for an owner to make a diary of ‘painful’ episodes to confirm the cyclic pattern.

Once it has been confirmed that the abnormal behaviour is likely to be related to the oestrus cycle, there a number of treatment options available to us. They all aim to result in high levels of circulating progesterone, thus mimicking the dioestrus phase of the mare’s cycle. The preferred trealment will depend on several factors. including:

This is the one of the newest, most successful and exciting treatments now available for treatment of undesirable oestrus behaviour. Experiments were performed by the legendary Professor ‘Twink’ Allen and Sandra Wilsher at the Equine Fertility Unit Newmarket.

The mare is monitored during oestrus and her ovulation date recorded. On day 10 post-ovulation, a small volume of plant oil (we use peanut oil is instilled into her uterus in a sterile fashion. This prevents the mare returning to oestrus for approximately 3 months. The exact mechanism of action is still unknown.

This technique has several advantages over other methods of oestrus suppression:

Intrauterine glass spheres were actually used by Arabs a long time ago for prevention of oestrus but have gained widespread popularity over the past 10-15 years The most commonly used sphere is a sterile 35mm diameter glass marble, placed into the uterus 0-48 hours after ovulation. The mare is monitored closely during oestrus and may be given a drug to induce ovulation which ensures accurate timing of marble insertion.

Interestingly, experimental work in 2008 showed that water-filled plastic balls had a success rate of 75%; much higher than the traditional glass marble. At Ashbrook, we have used the5e in recent years with apparently good results.

Regumate is a liquid progesterone supplement which effectively prevents the mare from coming into season.

Before starting Regumate it is important that the possibility o1 a uterine infection is ruled out The progestagen effects of Regumate decrease the mare’s ability to fight uterine infections; infections can therefore worsen if they are present before Regumate is started.

High doses of oxytocin given twice daily from day 7 to 14 post-ovulation can suppress oestrus The main disadvantage is the need to inject the mare for a prolonged period – some mares will not be amenable to this treatment.

There is very little, if any, scientific evidence that herbal and homeopathic treatments actually work to suppress oestrus. Of course, the evaluation of the effectiveness of the treatment is usually based on the perception of the mare owner. However, apparent effects are often explained by the placebo effect; the owner/observer understandably wants to see an improvement, so they do see an improvement.

The placebo effect is abolished by a well­ designed clinical trial but it is not usually in the best interests of the manufacturers of herbal and homeopathic treatments to perform these trials as it may prove their products to be ineffective!  Any genuine calming affect may be due to the addition of substances such as magnesium Some herbal remedies may also contain substances such as Devil’s Claw, which is reputed to have mild analgesic properties. However, a positive result is still difficult to prove scientifically as the results tend to be anecdotal rather than trial-based.

The investigation of behavioural problems in mares is not always straightforward. There are several conditions that must be ruled out before concluding that the problem is related to her reproductive tract. Even then, careful veterinary examination is essential to rule out pathological causes of unwanted behaviour such as ovarian tumours. These will be discussed in another article.

Once other causes have been ruled out and the behaviour confirmed to be cyclic and coinciding with her seasons, there are several treatments available. Of all of these, intrauterine plant oil appears to be the most effective, is safe and is legal under competition rules. At Ashbrook we have already started to use this treatment with good success and are sure that it will become a first line therapy for controlling excessive oestrus behaviour.

Roger is a Partner at Ashbrook Equine Hospital with overall responsibility for the Reproductive Services. He has a particular interest in the artificial insemination of mares; during the breeding season he runs the busy AI program based at Ashbrook in addition to visiting studs throughout Cheshire. Following further examinations in 2015, he obtained the RCVS Certificate in Advanced Veterinary Practice (Equine Stud Medicine). Using modern breeding techniques based on current research, Roger works closely with mare and stallion owners to improve conception rates.