The Shire horse is an animal which revolutionised agriculture in 17th century England. It’s among the largest of all breeds, capable of pulling weights which other horses could barely budge. If you were to form a mental image of a big, strong horse heaving a heavy plough across a frost-encrusted moor, steam billowing from its massive nostrils all the while, then the chances are that you’re thinking of a shire horse. The breed is a cultural icon, and it’s still found on farms today. In this article, we’ll more closely examine this magnificent animal. 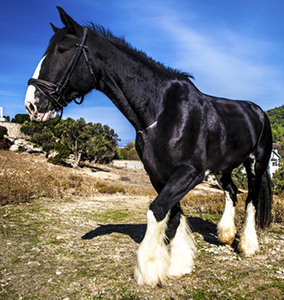 While the Shire horse is a relatively recent invention, its forebears were being sold in England as long ago as the 12th century. At the time, Oxen were the animals principally used to pull heavy loads, but horses still existed which were fit for the purpose. Horses were superior to oxen in many ways – they were stronger, more easy to train and ride, and less dangerous. That said, they were also more expensive, and so it took a while before the load-bearing workhorse really became a mainstay on English farms.

That said, pulling heavy loads on a farm, or a road, was not the only use for a big, strong, horse. They were also hugely useful in battle, thanks to their ability to trample and terrify enemy infantry, and the ease with which they could be controlled, even in a chaotic combat environment. An English Great Horse could easily bear a knight wearing full plate mail – and do so at a gallop!

This was to change with the introduction of gunpowder. Size and strength might have been useful qualities in a warhorse faced with swords and spears, but they were distinctly less so when the horse is confronted with muskets and cannons. For this reason, by the time of the English Civil War, cavalry was mounted upon faster thoroughbred horses, which were capable of charging down a lightly-armoured enemy before they had time to reload. But the heavy horse still had its uses on the battlefield, being used to transport heavy artillery from place to place – which they continued to do right up to the Second World War.

Big, strong horses were still required in other areas of life, too. The old English great horse was not retired – but bred with the Friesian, imported from the Netherlands, in order to help with haulage. The result of this was, eventually, the Shire horse – which by the nineteenth century had been established as a reliable beast of burden.

They were employed as cart horses, and were especially useful on the cobbled streets that ran through England’s towns and cities. Such surfaces demanded a horse which was large and well-muscled, with massive hooves to spread their weight over a greater area, and thereby minimise the risk of injury.

Naturally, this usefulness was to take another hit later on, when the rapid spread of mechanisation rendered beasts of burden like the Shire horse more-or-less obsolete. By the end of the Second World War, there was no longer any need for an animal such as the Shire horse – an animal which, let’s not forget, costs an enormous amount in food.

The Shire horse, as you might imagine, is a truly enormous animal. It stands more than seventeen hands tall, around two more than the average horse, and weighs around 1,800lb, which is 800 more than the average. Despite these considerable physical differences, shire horses tend to live for around the same time as most other horses, with a life expectancy of between twenty-five and thirty.

The Shire horse has a long, lean head, and large eyes. Its neck is slightly arched, and its shoulders wide and hindquarters wide and deep. Another distinguishing feature is to be found on the shire’s lower legs. The shire has heavily feathered hair on its lower legs, which often extends to entirely cover its massive hooves.

The breed has, over the years, been home to some record-breaking specimens. These include Sampson, the largest horse ever recorded. Sampson had reached the colossal height of twenty-one hands high by the time he was four (prompting him to be renamed ‘Mammoth’). He weighed more than three-thousand pounds, or as much as three average-sized horses put together, and presumably cost his owner, Thomas Cleaver, an extraordinary amount in food.

In the modern world, the Shire is more of a curiosity than a useful animal. It’s not going to smash into a line of revolting peasants, nor is it likely to be ferrying barrels of mead across the moors.

That said, the breed is still used for recreational horse-riding, and for some forms of labour where mechanical assistance is impractical. For example, in a dense forest, it might be necessary to carry heavy loads over short distances – and a shire horse will be able to assist.

The Shire is considered a cold-blooded horse, which means that they are gentler and more forgiving than their hot-blooded cousins. This, perhaps counterintuitively, makes them suitable for small children – and so riding schools often see the smallest rider mounted on the largest animal.

The good news for Shire-horse owners is that the breed is generally considered healthy. But while there are no known diseases which are entirely restricted to the Shire horse, there are a few which the breed is slightly more at risk from. Among the most notable is chronic progressive lymphedema, or CPL.

This is a disease characterised by swelling and lesions in the lower legs. It’s thought to be caused by problems in the lymphatic and immune systems, and, while there are treatments are available which address the disease’s symptoms, there is currently no known cure. Since the disease is more common in breeds of draft horse, like the Shire and Clydesdale, it is thought to be influenced by genetic factors.