Horses have been around for centuries. The ancient Greeks, Romans, and Persians used them for everything from warfare to agriculture – and so too did peoples from the more remote past. The United States of America, by contrast, has only been around for a couple of centuries – and the horse has played a crucial role in the development of that country, too.

In order to meet the demands of the new world, American horse breeders have had to come up with new sorts of animal. Among these is the Morgan  Horse, a breed favoured for a variety of purposes throughout American history – from pulling the coaches of 19 th century aristocrats to carrying civil war cavalrymen into battle. They’ve also provided the basis for other famous American breeds, like the Quarter Horse.

In this article, we’ll examine this famous breed in greater detail. Let’s begin, shall we? 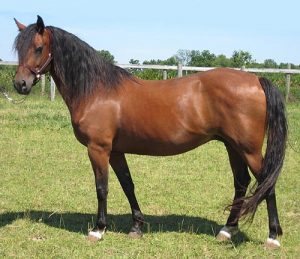 Unlike more ancient breeds, we know a great deal about the Morgan Horse’s history. In fact, we know exactly where the breed began: with a stallion named Figure, who lived in Massachusetts in the late 18 th century. In order to pay an outstanding debt, Figure was given to Justin Morgan, after whom the breed was named. All Morgan horses can trace their ancestry back to Figure.

Written records from the period tell us that Figure stood around fourteen hands high, and that he weighed around 450kg. Figure would later be fatally kicked by another horse, but during his life he enjoyed a prolific career as a breeding stallion, and sired a great many foals – but we only know about six of them, and only three of those six provided the foundation for the new breed.

Over the course of the century, the breed would spread across the country, and help to establish a number of others. Morgan mares would spread southward from Massachusetts, until they eventually reached the old west. In Texas, they would profoundly influence the development of the American Quarter Horse, while in Missouri, they would do the same with the Fox Trotter. A Morgan stallion was even exported to England, where breeders in Hackney noted its trotting ability, and introduced it into their stock.

This burst in popularity was not to last, however. As the century grew old, horse breeders came to favour breeds with longer legs. This led to the stocky build of the original bloodline becoming slowly diluted, and the breed being restricted to more isolated areas.

The breed also played a crucial role in the more violent parts of American history. Both sides in the American Civil War rode into battle on the back of Morgan horses. They were also used heavily in the Battle of Little Big Horn, where General Custer suffered his famous defeat.

The Morgan horse comes in a range of different colours, including bay, chestnut and pinto, as well as less common ones like grey, roan and dun. They’re generally of a single colour, though there are several recognised patterns, too. The breed is strong and powerfully built, with a short back and especially muscled hindquarters.

They’re particularly renowned for their trot, which is exceptionally balanced and animated. They’re built to move, and do so elegantly and naturally. On average, the breed stands around fifteen hands high, and weighs just under 455kg – making them almost a perfect middling in both categories.

The Morgan horse is a hot-blooded horse, which means that it’s capable of huge bursts of power and acceleration at short notice. Unlike its coldblooded cousins, the Morgan is very highly-strung.

It’s easily startled, and thus should be handled with care. Novice equestrians, then, should look elsewhere. For the expert, however, these animals will reward your care and attention happily.

The Morgan horse is an exceptionally versatile breed, and can be found in a variety of different show events – including dressage and show jumping. They’re also heavily employed in Western re- enactments and other cowboy-related events. Morgan horses are particularly suited to pulling carriages, and though the demand for that sort of labour no longer exists in the same way it did in the 1800s, the breed still finds work in driving events.

If you’re in search of a horse that will do a range of different tasks well, then the Morgan makes an excellent choice.

Like many breeds of horse, the Morgan is prone to a handful of different health problems. These include a muscle disease called type 1 polysaccharide storage myopathy. This condition can cause everything from muscle pain to cramping to cell damage, and results from a build-up of complex sugars (or polysaccharides) in the skeletal muscles. The result is pain for the animal during exercise, which in turn discourages exercise and leads to other associated conditions like obesity.

This condition, most often suffered by heavier horse breeds, is incurable – and our understanding of exactly how it’s passed on is less than complete. That said, it can be managed if proper attention is paid to diet and exercise.

Other genetic conditions carried by the breed relate to ocular conditions, which can cause swelling and cysts in the eyes. These are related to the same genes which affect coat pigmentation. There’s also the aptly named lethal white syndrome to consider. This condition causes foals to be born entirely white, and without a functioning colon. These foals die within a few days, often painfully – and so they’re often euthanized to prevent this.

While all of these conditions are terrible, they’re also mercifully rare – and so there’s little reason that you need fear for the health of your horse once they’ve been declared free of them. The Morgan is a generally healthy breed – and with proper care, there’s no reason that yours can’t enjoy a long and prosperous life.