The Gypsy Vanner is quite an unusual breed of horse. Like many of its cousins, it came to be in order to serve a distinct purpose. But unlike other horses, it’s been heavily shaped by the practical requirements and aesthetic tastes of a specific culture – one which often finds itself at odds with the mainstream.

In this article, we’ll take a closer look at the Gypsy Vanner, and see exactly how this unique breed has been shaped – and what makes it so interesting. 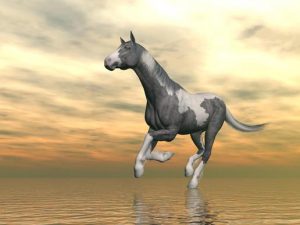 This breed came to be only relatively recently. During the middle of the 19th century, travelling people in Britain needed a certain sort of horse to pull their caravans. Horses drafted for this task needed to be intelligent enough to receive specific training; for example, when climbing a hill, a horse would be trained to never stop, as doing so might see it dragged back down by the weight of the caravan. These horses also needed to have reliable temperaments – as they’d be in close contact with entire families, including small children.

Of course, the Roma people were not terribly wealthy, and couldn’t afford to be picky. They would therefore take any unwanted horse or mule they could find. These included the horses whose colours were not popular among mainstream breeders.

The gypsy horse-drawn caravan was at its most widespread in the late 19th and early 20th centuries, but became less useful as mechanisation began to take hold of transport. It wasn’t until just after the Second World War, however, that the modern breed to take shape. By this time, Shire Horses, which had been used for carrying armoured knights into battle, pulling heavy ploughs across fields, and carting loads around busy city centres, were no longer valued.

These horses became popular among Gypsy breeders, who saw them as status symbols. They would breed them in order to achieve marked feathering and high bone-density, as well as for an animated gait. To do this, they introduced Welsh cobs into the bloodline. Gradually, the breed became gradually smaller – but without sacrificing any of the aesthetic qualities that made the breed so desirable to the Gypsies – namely their distinctive colouring and feathering. These smaller animals were far more economical than their larger counterparts, and so would prove more useful in the day-to- day business of caravanning (or ‘vanning’, the term from which the breed draws its name).

The Gypsy Vanner is a form of cob – a small sort of horse characterised by the stoutness of its build. It’s shorter than most horses, at an average of around fifteen hands tall. It weighs around 630kg, however, which makes it heavier than the average. All of this extra weight comes in the form of dense bone and muscle, which ensures that the breed is extremely tough and hardy.

The Vanner comes, in the main, in four different colours, which makes it slightly less diverse than other breeds. These colours are bay, white, black and ‘buckskin’. Vanners can also be piebald and skewbald, with large patches of colour broken up by slightly smaller ones across the coat.

Gypsy Vanners are a very flexible breed, and can be employed for work and dressage, as well as for general riding. Like the Shire Horses it’s descended from, the Gypsy Vanner can be described as a cold-blooded horse. This means that it’s incapable of moving quite so fast when called upon to do so – but it also means that the horse is far more relaxed and difficult to startle. This makes it particularly useful for teaching older people and small children to ride. This is particularly so in the case of the latter, who obviously benefit from the breed’s smaller size. For this reason, riding schools might find that a vanner makes for an excellent addition to the stables.

Gypsy Vanners are also of great academic interest to horse lovers, and so can be found on display at a variety of horse fairs – particularly in the United States, to which the breed was only introduced in the later 90s.

The Gypsy Vanner is a breed that’s famed for the sturdiness of its build. It’s able to endure even the most torrid conditions without batting an eyelid. That said, like most horse breeds, the Vanner is not without its own particular problems.

In particular, being a heavily-feathered breed, the Vanner is vulnerable to cracked heel. This is a condition which affects the animal’s feet, causing inflammation above the hoof and below the fetlock, and requiring treatment in the form of special creams. Horses kept in especially wet and muddy pastures are at greater risk of contracting the condition.

The problem with feathered horses is not that they’re at any inherent greater risk from cracked heel, but that their feathering disguises its symptoms. While in other breeds, the condition might be perfectly obvious, in Vanners, it’s rarely so until the condition has progressed to the point that it effects the horse’s ability to walk. The solution here is a simply one – be sure to carry out frequent inspections of the horse’s feet, and be sure that they’re kept in a dry, safe environment.

Another condition to which Gypsy Vanners are especially vulnerable is ‘rain rot’. This is a skin infection which manifests as large crusty scabs on the horse’s back. This condition comes about, as you might imagine, during rain – the combination of moisture and heat in a Vanner’s mane provide the bacteria with the ideal conditions in which to thrive. They can then spread from horse to horse, and cause a widespread problem.

In order to combat this problem, it’s best to take preventative measures. Proper stable management, in order to keep the stable dry and free from possible infection, is a must. Ensure that stalls are regularly cleaned and dried, and that ventilation is adequate. In doing so you’ll provide your Vanner with the environment they need to remain healthy and happy.