Of all the parasites which affect a horse, gastrointestinal worms are among the most common. Such worms come in many different forms, each of which acts in different ways and produces subtly different symptoms. Tapeworms are especially widespread and dangerous, and so it’s vital that horse owners and breeders take steps to control their numbers. In this article, let’s consider exactly how this might be achieved.

How do tapeworms live?

In order to understand how the tapeworm effects horses, and what can be done to stop them, it’s worth considering the tapeworm life cycle. 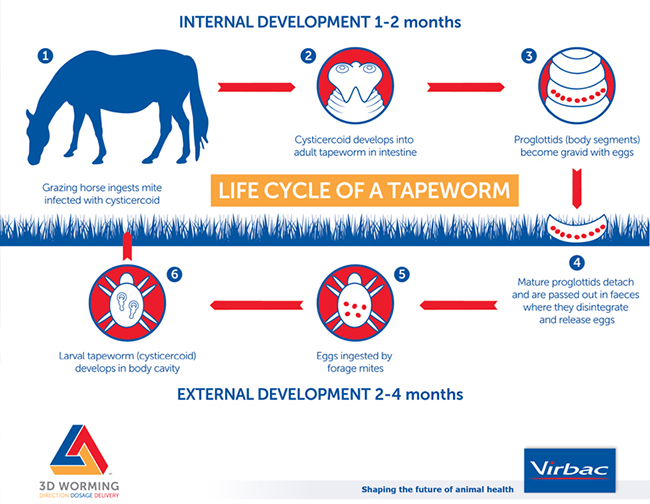 Tapeworm eggs found on the ground tend to be ingested by an intermediate host before finding their way into the horse itself. This host is often a soil-dwelling mite, which will ingest the worm egg and allow it to develop over the course of several months. Since these mites are microscopic, it’s impossible for the horse to detect them while they’re grazing.

The horse will then come along and swallow an infected mite, allowing the worms to continue their development in the horse’s gut. This will produce proglottids, worm segments with a complete reproductive system, which will pass through the anus as faeces and lay eggs, to be ingested by mites, which will start the cycle again.

In order to survive inside the horse’s gut, the worms will tend to congregate within the intestinal walls, which they’ll eat at, causing extreme discomfort.

What sorts of tapeworm effect horses? 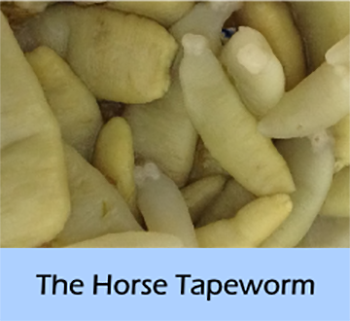 There are three documented species of tapeworm capable of infecting horses. Of these, the most common is Anoplocephala perfoliata. Worms of this species can grow around three inches long and around half-an-inch wide. While this might not seem like a particularly large organism, worms of this sort are able to cause severe problems, because they’ll tend to cluster around a given site within the digestive system.

Particularly favoured sites include the caecal wall, around the beginning of the large intestine next to the appendix, and the ileocecal junction, the small muscle valve which separates the large intestine from the small. Clearly, a blockage in this crucial area can be extremely problematic.

What drugs can be used to combat them?

There are two effective drugs currently used in combating this organism. These are praziquantel and pyrantel. These drugs are each effective, and will kill almost 100% of the worm population within a couple of days. That said, it’s important that when administering either of these drugs, as with any other sort of anti-parasitic treatment, we bear in mind the danger of the population of tapeworms becoming resistant.

This makes it especially important to regularly rotate between the two wormers, allowing the population of worms that’s not resistant to the medication to recover to the point that it’ll provide some competition for the resistant strain.

It’s also important to ensure that the horse’s environment is kept as clean as possible, and that they’re frequently allowed to graze in different paddocks where they won’t be grazing on soiled grass. This is the means through which worm populations will pass from one horse to another, and thus limiting the spread of the worm.

Clean stabling conditions and other housekeeping techniques will also offer a worthwhile layer of protection. Manually going out and removing droppings is a particularly worthwhile technique, as is rotating other grazing animals, which are resistant or immune to the worm in question, onto the fields where the horses have been grazing. Sheep and cattle are popular choices.

In order to battle resistant worms, it’s important that we’re able to identify which horses are in danger and which aren’t. This will allow us to administer the medication only where it’ll do good – and thereby minimise the unnecessary exposure of non-resistant worms to medication.

How can tapeworm be diagnosed?

The presence of worms can be established using a variety of different techniques. A faecal egg count will involve taking a sample of an infected horse’s faeces and looking to see how many worm eggs are present. It’s a popular method because it’s no intrusive, and it’s easy to perform. Consequently, it’s inexpensive.

Unfortunately, the method is only really reliable when treading redworms and roundworms. Tapeworms tend to release their eggs in a different way, and thus faecal egg counts are not a reliable means of identifying them.

A better way to test for tapeworms comes in the form of a blood test. But a blood test has its own problems. It requires a qualified vet to draw the sample, making it more expensive. And it’ll also cause distress, however minor, to the horse. If you’re looking to perform regular tests, than a blood sample is probably not going to be practical. Fortunately, there’s another way.

A saliva test will examine the horse’s saliva. Like the blood test, it isn’t to identify the tapeworms themselves, but to find the antibodies the horse’s body produces in order to combat them. Unlike the blood test, however, you won’t need a vet to collect the sample – you can simply collect it yourself and send it to a lab for analysis. This technique is a newer one, but it’s survived the rigours of peer review and emerged intact.

Effective control of tapeworm populations requires a multi-pronged approach; on which combines careful maintenance of the horse’s environment at all times of the year with regular testing and targeted worming medication. With a combination of all of these techniques, you’ll be able to ensure that your horse has the maximum possible protection against tapeworms.